The 2019 champion Washington Mystics compiled one of the strongest offensive campaigns in WNBA history, leading the league in points and assists per game, field goal percentage, 3-pointers made (a WNBA record), free throw percentage and offensive rating. Coach Mike Thibault’s offensive juggernaut continued its onslaught in the postseason, upping the scoring to from 89.3 to 91.1 points per game.

In addition to having the best name in professional basketball, Aerial Powers enjoyed the strongest year of her career while serving as a catalyst for the Mystics.

Though she spent most of 2019 coming off the bench, she was a key contributor: Her career-high 11.4 points per game were fourth on the team, despite her 19.8 minutes ranking seventh. Her 20.8 points-per-36 scoring finished behind only Elena Delle Donne and Tianna Hawkins. Powers’ 23.5 percent usage rate was also good for third behind Delle Donne and Hawkins, pacing the bench.

The fifth overall pick out of Michigan State in 2016, Powers spent her first two-and-a-half seasons with the Dallas Wings before a deadline deal sent her to Washington in 2018.

During 16 games before last season’s All-Star Break, Powers averaged 9.6 points in 17.5 minutes, scoring in double-digits just six times. After the break, she hit double-figures in 11 of 14 contests. From August 8 to September 6, she went on a nine-game streak of scoring at least 10 points, averaging 15.7 over that span and shooting beneath her season mark of 43.4 percent just twice. Her minutes also climbed to 22.3 and she averaged 13.5 points during the season’s second half overall.

PLAYING WITHIN THE SYSTEM ATLANTA, GA Ð JUNE 23: Washington’s Aerial Powers (left) and Kiara Leslie (right) on the bench during the WNBA game between the Atlanta Dream and the Washington Mystics on June 23rd, 2019 at State Farm Arena in Atlanta, GA. (Photo by Rich von Biberstein/Icon Sportswire)

Powers has the ability to create her own shot off the dribble or take the looks created for her.

Her 3-point attempts come almost exclusively within the flow of the offense. 92.1 percent of her makes were assisted from 24 feet or more. A whopping one hundred percent of her attempts from the corner were assisted. Most of those came from dribble-drives and kicks to Powers on the weak side of the defense.

Every team needs a reliable dead eye like this who can act as a pressure-release valve when the defense collapses:

But Powers is not just a catch-and-shoot sniper who hangs out in the corners. The ability to attack closeouts is equally valuable, especially when the defense must respect either scenario.

When she did put the ball on the floor, Powers had the ability to get to the basket and convert. However, she struggled from midrange, hitting only 12 of 42 shots (27.9 percent) while being assisted on only four of the 12 converted looks.

Powers found much more success attacking and drawing the foul while the defense recovered its position. She converted a team-high percentage of her points at the free-throw line (24.8 percent).

Washington operated at a pace of 92.4 when it had its healthy starting five of Ariel Atkins, Natasha Cloud, Delle Donne, LaToya Sanders and Kristi Toliver. That would’ve ranked them eleventh, ahead of only Dallas. The second unit boosted that number to 94.4, eighth in the W.

Powers was one of five players on the Mystics to average a pace of over 99. Of those other four, only Shatori Walker-Kimbough played significant minutes.

Powers scored 22.2 percent of her points off turnovers, capitalizing in transition. Only Toliver scored more off turnovers.

Toliver banged knees with Indiana Fever forward Stephanie Muvunga during the closing minutes of a game on August 8 but shook it off and closed out the game. The next day, it worsened and she was diagnosed with a knee contusion. That bone bruise lingered, keeping her out through the rest of the regular season. Powers started the next 10 games until Toliver returned for the playoffs.

In her first action after being inserted into the starting lineup, Powers played a season-high 36 minutes during a 101-78 victory over the Minnesota Lynx. She dropped 20 points, snagged five boards, dished out three assists and swiped two steals, all en route to a team-best +19 plus/minus.

She took the ball during Washington’s very first possession at the top of the key against Lynx guard Seimone Augustus, dribbling right, causing Augustus to cut under a rub by Sanders, before crossing back left. Sanders was now set with a full screen.

Instead of attacking three-time Defensive Player of the Year Sylvia Fowles in the paint, Powers danced left, sidestepping along the free-throw line to find space. She rose, fired, and was backpedaling before the ball rattled home:

According to High Post Hoops’ free agency tracker, the Mystics’ have just short of half their allowed salary remaining despite four players yet to be signed. Three of those four, however, will be looking at massive pay increases: Elena Delle Donne, Toliver, and Finals MVP Emma Meesseman. 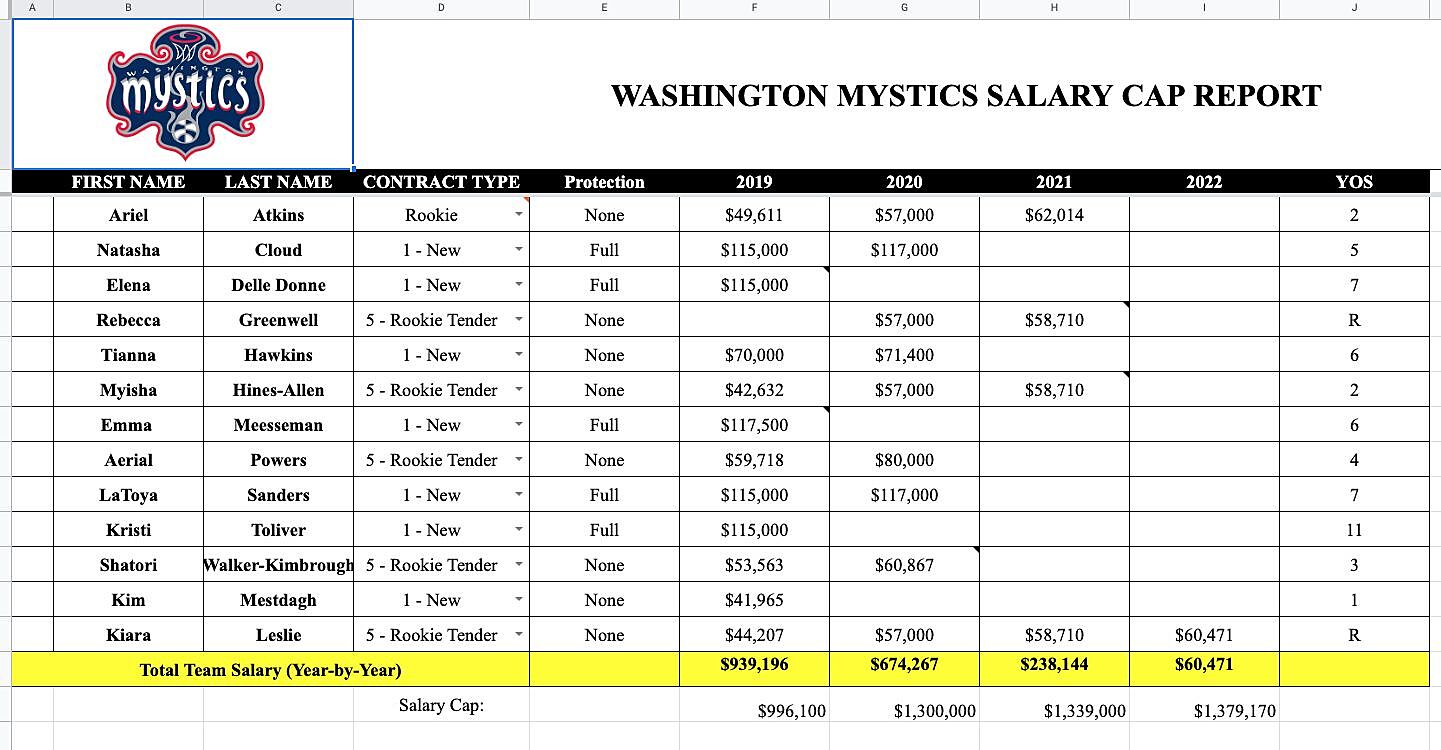 Both EDD and Toliver have strong ties to the DC area. As detailed by Albert Lee for SB Nation’s Bullets Forever, Meesseman’s schedule could vary from the other players on the team, largely hinging on what happens in February with the Belgian Olympic qualifiers.

During a Winsider interview, Coach Thibault revealed that the team has verbal contracts in place with EDD and Meesseman, while also strongly implying that Toliver will return.  Even with its large cap space, the team cannot afford all three players at the new $215,000 max, so it will need to get creative (or talk one of the three into taking less than the max).

If the Mystics decide to re-sign all three no matter the cost, the next option would be to trade one of the guards on the roster: Atkins, Cloud or Powers.

At her rookie scale, Atkins would not make much sense to deal as she’s also under contract for 2021. Cloud and Powers each see their contracts end after 2020, so the options are to run it back one more time or deal one of the two.

EDD also underwent back surgery on January 24, 2020, though her prognosis is good, and she’s expected back for the start of the season. If she’s limited at all, expect Meesseman to fill her spot and the second unit to get more run. Washington already managed injuries to its star last season as well, so this team is capable of repeating if it eventually returns the whole rotation in 2020.

If that happens, Powers will likely return to her position as the ball-handling option off the bench, ready to step into whatever role is required, including starting for longer stretches.